The usage of drones by civilians has increased significantly over the past few years.  An estimated 600,000 drones will be in use by commercial enterprises by 2018. The top industry using drones in the United States is photography with the second largest being real estate ( DMR, www.expandedramblings.com).  Drones have been used in military applications for years but as the drones move to the commercial industry and to hobbyists, concerns have been raised regarding safety and enforcement of Federal Aviation Administration (FAA) regulations.  The FAA refers to drones as an unmanned aircraft system (UAS) and regulations apply for personal and professional use.  With drones becoming more common, it’s important to know the rules.  Even if you’re just flying a drone for fun, you must register with the FAA, stay at least 5 miles away from airports unless you have prior permission from air traffic control, and have the drone in a person’s line of sight at all times.  Visit the FFA’s website for rules regarding Fly for Fun, Fly for Work.

Scientists have been exploring the use of drones in environmental applications for several years.  Drones can be used to collect ecological data by aerial surveillance without disturbing sensitive environments or species thus limiting human interaction that can often be damaging to the environment.  Drones have also been applied to situations to minimize the risk of human injury such as surveying elevated heights or assessing conditions that may result in physical danger.  The usage of drones also provides efficiency in surveying.  For example, drones are used to survey pipeline corridors from remote stations saving both time and energy by not using aerial flight to photograph corridors.  Drones use a number of imaging techniques including infrared sensing, which can be used to measure vegetation growth and photogrammetry, a remote sensing process that creates an “ortho-mosaic” of the area.  This technology has been used in real estate functions such as Property Condition Assessments and Phase I Environmental Site Assessments.  Other environmental applications include detecting water intrusion, animal management and conservation, coastal management, river and flood management, plant conservation, forestry, regulation enforcement, and monitoring change. 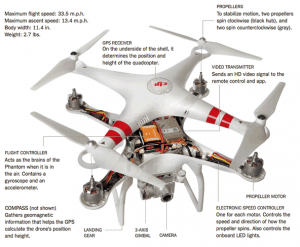 There are two UAS Platform Types of drones: fixed wing and rotary. Fixed wing drones generate lift through wings while rotary drones generate lift by rotating propellers. This allows rotary drones to land and takeoff from the ground while fixed wing drones must be started by throwing into the air. Fixed wings have longer endurance times, are generally faster, and are more efficient for large areas. Rotary drones are more flexible, can hover, fly lower, and are better for inspections/higher resolution pictures. Both drones can be autonomously flown using apps or by defining a set path.  Drones are now being researched for use to count livestock, check fence lines and roads, find missing animals, and measure the nutritive value of forage.

SSCI participated in a webinar entitled “Drones on Rangelands–The Basics” presented by the Texas A&M AgriLife Extension Service ecosystem science and management unit.  In the presentation, an example of drone use in range land application was provided.  The drones map out the area surveyed and then a computer software is used to search for the shape of the cattle and take out the background aerial image leaving only the cattle, as seen on the right side with the yellow background. The program then counts the number of outlines of cattle.