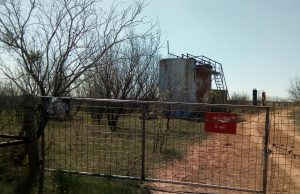 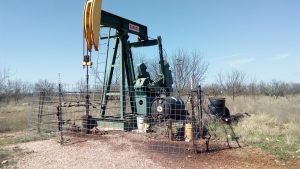 Oil spills consisting of crude oil or drilling “mud” are often found at oil and gas drilling sites.  Drilling fluids are captured during drilling in pits and held for later disposal. The frequency of spills and improper maintenance and disposal of drilling mud results in soil, surface water, and groundwater impacts.  Once the drilling field has been exhausted or abandoned due to economic reasons, the wells, drilling equipment, tanks, pits, gathering lines, and other equipment (as seen in the pictures above) are left behind for property owners to cleanup.

Because there are no requirements in most states for property owners to be notified about abandoned oil and gas wells on their properties, may owners and investors are surprised by contamination on their property from exploration activities.  SSCI often identifies oil and gas concerns during the performance of a Phase I Environmental Site Assessment (ESA).  The Phase I ESA process includes review of historical documentation including aerial photographs, topographic maps, tax records, deed restrictions, regulatory records, water well and oil and gas well records. Historical records are used to locate previous wells, waste pits, pipelines, and other equipment used during the drilling and development of petroleum resources. 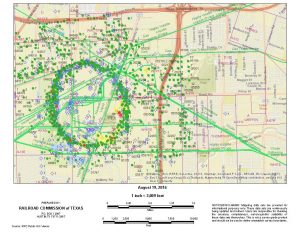 The RRC map shows circular configuration at wells located at the Pierce Junction Salt Dome near State Highway 288 (SH 288) in south Houston (Railroad Commission of Texas (RRC), RRC Public GIS Viewer). The concentric rings of wells that radiate from the salt dome are shown extending towards SH 288 and Beltway 8 (Sam Houston Parkway), just north of Pearland.  Pipelines are evident transecting the area, all of which are hazards to property developers and construction such as highway expansion and the installation of utilities. 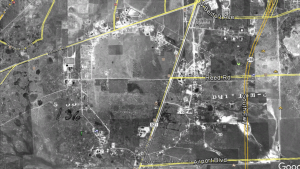 Shown here is an aerial image of the Pierce Junction Salt Dome depicting the oil and gas activities in this area of south Houston in 1953 (Google Earth, 1953, Aerial Image).

The Railroad Commission of Texas (RRC), established in 1891, is the state’s oldest regulatory agency and through its Oil and Gas Division, regulates the exploration, production, and transportation of oil and natural gas.  Originally, the RRC was given jurisdiction over operations of railroads, terminals, wharves, and express companies. The RRC expanded it’s reach, taking over responsibility for regulating oil pipelines in 1917, oil and gas production in 1919, natural gas delivery systems in 1920, bus lines in 1927, and trucking in 1929.  Today, The RRC has jurisdiction over spills associated with the exploration, development, and production of oil and gas.   For more information, see Who Regulates Oil and Gas Activities in Texas?

With the history of oil and gas exploration dating back to the mid-1800s in Texas, it is no wonder that many developers are struggling with the hidden dangers of oil and natural gas exploration.  In 1901, Spindletop in Beaumont, Texas gushed and launched an oil boom with 4 million barrels of oil being produced that year.  Crude oil production in the US is anticipated to hit a record high of 9.53 million barrels per day in 2018.  While regulations exist today to prevent environmental impacts from drilling activities, spills and releases still occur.

SSCI has closed hundreds of waste pits and wells in marsh, swamp and upland areas in Texas and Louisiana.  SSCI’s team of professional geologists, environmental scientists, and engineers have worked on hundreds of oil and gas sites to obtain closure under remediation standards established by the RRC and the Texas Commission on Environmental Quality (TCEQ).  Remediation services in oilfields at SSCI include soil and groundwater investigation and site closures.  For more information, contact us at 800.324.7724 or at ssci@sscienvironmental.com.