In September 2015, SSCI team members attended the League City Historical Society Living History Dinner at the Walding Station in League City, Texas.  The League City Historical Society’s annual fundraiser offers the opportunity to spend an evening with a famous “figure in history”.  This year the nationally known Larry Marple from Ohio provided an informative and entertaining portrayal of the Colonel Theodore Roosevelt.  Mr. Marple played the role of Col. Roosevelt riding along with his Rough Riders as they headed to Cuba to fight for Cuban Independence. 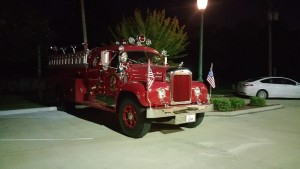 SSCI’s President, Helen I. Hodges, serves on the Board of Directors for the League City Historical Society (LCHS) as well as most of SSCI’s employees serve as members of LCHS.  SSCI’s LCHS members attended the Living History Dinner and were greatly amazed by the event.  The venue was full of fascinating antiques from a huge antique fire truck to old time barber chairs.  A Silent Auction was held during the event auctioning off a wide selection of items provided by many contributors ranging from baked goods to paintings.  SSCI attendees were intrigued to learn about Col. Roosevelt’s life journey. During the audience interaction, Mr. Marple’s knowledge as Col. Roosevelt was dramatically put to the test.

Mrs. Theresa Abell with SSCI said, “The man definitely knew his stuff! Intense questioning from the audience livened up the details as well as his thoughts behind decisions he’d made as our President.  I was thrilled to realize that we share the same birthday, October 27th. Definitely an event I would recommend to all and a big ‘thank you’ to LCHS for providing us this unique experience of history! I’d give it a ***** (5 stars).”

Overall, SSCI gave the performance two thumbs up and anxiously awaits The League City Historical Society’s next event “Ghosts of the Past” Genealogy in a Cemetery.  The event will be held Saturday, October 31, 2015 come rain or shine to deliver fun and enlightening tales of the genealogy of the Pioneer Family of Gordy. Surnames include Gordy, Derrick, McFaddin, Rakestraw and Frost.  The tour includes West Bay Common School Children’s Museum, 210 N. Kansas Street, and continues with a short drive to Fairview Cemetery.