On Monday, Aug. 21, 2017, a total eclipse will cross the entire country, coast-to-coast, for the first time since 1918.  Check out when you’ll be able to see the solar eclipse at NASA.  NASA is sharing information on safe eclipse viewing with community centers, and citizen science projects are developing.  If you can’t watch Monday’s total solar eclipse, don’t worry. Another one will be visible in the U.S. in 2024. 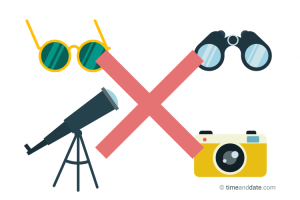 According to NASA, the following materials should never be used to view a solar eclipse:

The only way to safely view the Sun – eclipsed or not – is to either project or filter the Sun’s rays.  The pinhole projector is a quick DIY project.

If you are using a long tube or taping 2 tubes together, cut the end of the tubes and tape the foil with a pinhole on 1 end. On the other end, tape a piece of white paper over the end of the tube. This will act as the screen. Close to this end, cut a rectangular hole using the knife. This will be your viewing window.

With your back toward the Sun, point the end with the foil toward the Sun, angling the tube along the Sun’s rays. Look into the tube through the viewing window until you see a reversed image of the eclipsed Sun on the screen.