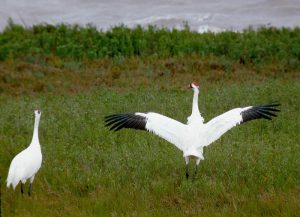 With the first sightings last week of iconic, endangered whooping cranes along the Texas coast, the Texas Parks and Wildlife Department is reminding Texans to be on the lookout for these impressive birds as they move through the state.

Whooping cranes face a harrowing, 2,500 mile journey from the breeding grounds in the marshy taiga of northern Alberta’s Wood Buffalo National Park to the coastal marshes of Texas each year. The migration south to Texas can take up to 50 days with the population typically traveling in small groups. Man made structures like power lines, communication towers, and wind turbines pose significant threats, as do more natural perils like predators and harsh weather.

Along the way, whooping cranes seek out wetlands and agricultural fields to roost and feed in, and they often pass large urban centers like Dallas/Fort Worth, Waco, and Austin. Though they rarely stay in one place for more than a day during migration, it is important that they not be disturbed or harassed at these stopovers; in fact, as a federally protected species, it is illegal to do so.

The first whooper pair of the season was just spotted at the Aransas National Wildlife Refuge on October 22. Recent heavy rains brought much needed freshwater to the area and should result in improved numbers of blue crabs and Carolina wolfberries, preferred whooper foods in coastal marshes.

The tallest bird in North America, the whooping crane, is also one of the rarest. With a current population of around 505 individuals, whooping cranes are slowly returning from the brink of extinction thanks to coordinated conservation efforts. Out of 87 nests this summer only about 24 chicks fledged, a low number compared to recent years, likely due to the unseasonably cold, wet weather.

The Aransas-Wood Buffalo population, the only “natural” flock of whooping cranes in the world, spends each winter in and around the Aransas National Wildlife Refuge near Rockport. However, with population expansion in recent years they have begun spending time in more nontraditional areas, venturing some distance from the refuge to find food and other resources.

“These iconic, endangered species deserve our respect as they migrate through the central flyway, and we ask the public to avoid disturbing them if spotted,” states Wade Harrell, U.S. Fish & Wildlife Service Whooping Crane Recovery Coordinator. “Along with whooping cranes migrating from Canada, Texas has had a few visiting whooping cranes from a reintroduced population in southwest Louisiana. These cranes are all marked with leg bands and have been most commonly spotted in southeastern Texas, near Beaumont.”

There are several other non-game species that are similar in appearance such as wood storks, American white pelicans, great egrets and others, but a close look will reveal fairly obvious differences. More information on look-alike species is available online.

The public can help track whooping cranes by reporting sightings to TPWD’s Whooper Watch, a citizen-science based reporting system to track whooping crane migration and wintering locations throughout Texas.  More information about Whooper Watch, including instructions for reporting sightings, can be found online and by downloading the iNaturalist mobile app. These observations help biologists identify new migration and wintering locations and their associated habitats.