SSCI was in attendance at the annual League City Historical Living History Society’s Dinner;  this year’s theme was “The Great War” (World War I). The Society is a non-profit organization that promotes and preserves the history of League City, Texas. It’s annual Living History Dinner is a fundraiser SSCI has supported for over a decade; proceeds benefit historical society projects like the “One-Room School House” and the West Bay Area Common School Children’s Museum. This year, the Silent Auction featured fine art by local artists, basket prizes and vintage architecture items; I won a special pet gift basket that included grooming services, shampoo and pet treats.
It was a sight to behold at Butler’s Courtyard as Historical Society members dressed in period costume, and the historical guest speaker Jeffery Hunt spoke as a soldier of the 36th Infantry Division (Texas National Guard). Mr. Hunt reminded us of the values created in the past, and what Americans have overcome as a state and as a country to get where we are today. The guest speaker closed thoughtfully from a WWI soldier’s point of view by asking the audience to remember what a great tragedy The Great War was, and his hopes that the devastation caused in its wake would not be repeated in the future. The audience was left to reflect on the fact that World War II would begin just 21 years later. For more information please visit the LCHS website:http://leaguecityhistory.org/ 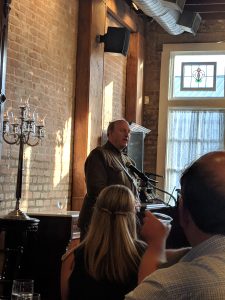