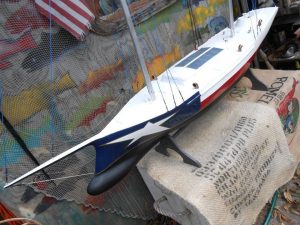 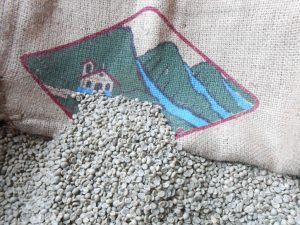 Joe and Terry Butcher are the proprietors of local coffee roastery El Lago Coffee located in Seabrook, Texas. In an effort to reduce the impact of shipping coffee across the planet and pursue their love of sailing the pair took their sailboat’s maiden voyage to South America to pick up their first load of green, or raw, coffee beans for roasting back in the States.  However, on their return journey the pair encountered a storm, forcing the proprietors to call the Coast Guard for rescue.  The sailboat, and their caffeine-laden bounty, was lost to the depths of the Gulf of Mexico.

Today the Butchers are roasting coffee that they import in a traditional manner, it comes in 100 kilo packages and is transported by a cargo barge. The goal of El Lago Coffee Co. is to use the proceeds from roasting specialty beans to fund another sailboat with a much larger hull allowing the dream of EcoSail-transport to live on.

El Lago Coffee Company states that the El Lago Coffee Schooner will be a zero emissions “Ecosail” ship and carry a standard 20’ shipping container. The maximum load will be 47,500 pounds of green coffee beans. The duo say that they can begin construction of the Schooner when they reach their goal of selling 100,000 pounds of coffee annually.  In support of local business and eco-friendly initiatives, SSCI has started sourcing office coffee from El Lago Coffee Co. in an effort to help fund the Butcher’s dream of eco-sailing.